The Regent Theatre Stoke may have started out as a cinema, but it’s now one of many great theatres in the city center in Stoke-on-Trent, England. The 85 year old building has seen some ups and downs over the years, but it’s persevered and still attracts large crowds. 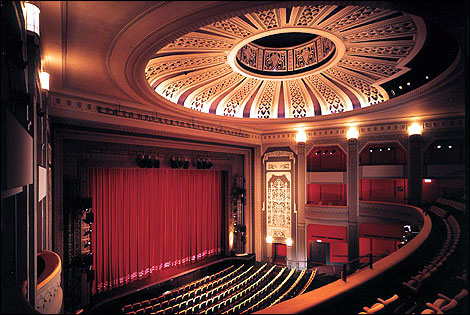 The Regent Stoke was built in 1929 and operated as a cinema. It was commissioned by the Provincial Cinematograph Theatres and was one of many “Regents” built throughout England. The design of the building was created by William E. Trent.

William Leason, Lord Mayer of Stoke-on-Tent, opened the theatre in 1929. The original design of the building allowed for the venue to be used as a cinema and a place for live entertainment. In its early days, the stage hosted a number of live performances.

The theatre underwent a name change in 1950. At the time, it was owned by Gaumont British who renamed the venue The Gaumont. During this time, the theatre hosted dramatic performances by local amateurs. The venue also played host to many live performers, including Cliff Richard, Shirley Bassey, The Beatles and Stevie Wonder.

In 1974, the venue was once again renamed to The Gaumont Film Centre and was converted into a three-screen cinema. Odeon took over ownership of the theatre in 1976.

The building’s condition had deteriorated greatly by the 1990s with the theatre’s interior dome suffering great water damage. Restorations had to be made if the theatre were to remain open. A trust, known as the “Regent Theatre Trust,” was established to help with the cost of restoring and renovating the building. It took three years and £23 million to complete the restoration.

The theatre reopened its doors in September of 1999 and was completely restored to its Art Deco style. The October opening of the theatre was led by Elizabeth II. The theatre is currently owned by the Ambassador Theatre Group and boasts a seating capacity of 1,600.

The Regent Theatre boasts four event facilities for hire that can be used for day or evening events. A dedicated management team, professional AV and a catering staff are available to ensure that all events run smoothly and according to plan. The facilities for hire include:

For ten years, the theatre played host to more than 15,000 young dancers and 2,500 new pieces of choreography through a production commissioned by Make Some Noise and the Arts Council.

Backstage theatre tours are available for:

Tours are just £7.50 and include tea/coffee and biscuits.

Lift access is available on all levels of the theatre for patrons with limited mobility. A lift can be found in the theatre foyer. Several wheelchair spaces are also available in the following areas:

The cloakroom and the box office have low level counters and are accessible.

Infra-red sound enhancement is available to patrons with impaired hearing. A headset or necklace is available for use to boost the show’s volume. Guide and hearing dogs are also permitted in all parts of the theatre.

There are also many signed, captioned and audio described performances for users with disabilities.

Since its reopening 1999, the Regent Theatre Stoke has played host many major national tours, including:

Getting to the Theatre

The Regent Theatre Stoke is located on Piccadilly ST1 1AP. The venue is accessible via:

You can find the address here, get contact details here and take a look at the seating plan here.

This website uses cookies to improve your experience while you navigate through the website. Out of these cookies, the cookies that are categorized as necessary are stored on your browser as they are essential for the working of basic functionalities of the website. We also use third-party cookies that help us analyze and understand how you use this website. These cookies will be stored in your browser only with your consent. You also have the option to opt-out of these cookies. But opting out of some of these cookies may have an effect on your browsing experience.
Necessary Always Enabled
Necessary cookies are absolutely essential for the website to function properly. This category only includes cookies that ensures basic functionalities and security features of the website. These cookies do not store any personal information.
Non-necessary
Any cookies that may not be particularly necessary for the website to function and is used specifically to collect user personal data via analytics, ads, other embedded contents are termed as non-necessary cookies.
SAVE & ACCEPT